The former Craft Buddies shop at Post Office Court in Uckfield has quickly found a new occupier which is Goodhew Painting & Polishing. Richard Oldfield of Lawson Commercial who handled the letting said that there was a lot of interest in this shop and we rapidly found someone keen to take it on. The new occupier is a specialist trader in all things gold, especially jewellery, doing both buying and selling but doesn’t actually function as a conventional jewellers. They should make an interesting addition to the varied retail opportunities in the Town. 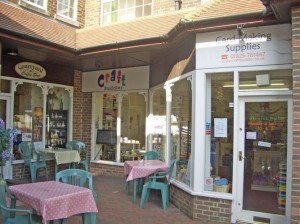 Lawson Commercial have let the former Fludes Carpets shop on the corner of Civic Approach and the High Street in Uckfield. Lawson Commercial partner Chris Lawson said: ‘ When we were first instructed on this shop there was a flurry of activity and we very quickly had three retailers who wanted the premises. The Landlord selected an independent trader not represented in the Town and solicitors were instructed. Unfortunately we never expected it to take 7 months for the legal work to go through but finally a new lease has been signed and a new bakery business will be opening very shortly following a refit. This highlights that we have been very successful in finding occupiers for retail premises, not only in Uckfield but also in Crowborough. So much so that we only have one vacant premises to offer in Uckfield HIgh Street this being the old Pizza Zone at 188 High Street. This has posed something of a problem for both Sense and British Heart Foundation following the recent fire at 122-126 High Street. Both charities wanted temporary shops to trade from whilst the building is restored but there simply isn’t anything available which is suitable for them. So if you are thinking of moving or thinking of selling we would like to hear from you as we have people wanting shops in Wealden towns’. Phone Chris Lawson or Richard Oldfield at Lawson Commercial on 01825 764488. 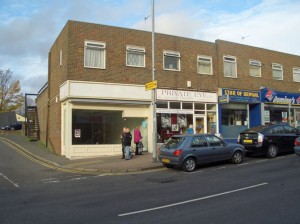 Speculating why some of the Wealden towns were full and there were reports in the national media of other communities in England where many of the shops were boarded up Chris Lawson of Lawson Commercial said he thought it had got a lot to do with the fact we have free car parking in Wealden and have had it for a number of years. He was contacted recently by somebody in Lewes complaining about boarded up shops and what could be done about it and made the point that they should reintroduce very cheap parking charges or abolish parking charges completely if they want their High Street to recover. Quoted in The Daily Telegraph was information following a survey carried out by Confused.com, the insurance firm. They had surveyed 2,000 people and more than 2 in 3 drivers, 69%, avoided shopping areas with high parking prices. It was also reported that parking charges rose 12.5% last year as motorists spent nearly £8 billion to park their cars. Long may it be that Wealden do not introduce pay parking to their Towns.’ 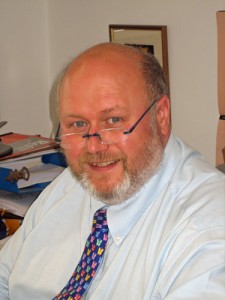 On Sunday night a major fire in the High Street in Uckfield severely damaged most of the 1st floor and roof above four shops at 122-126 High Street. Lawson Commercial manage these properties on behalf of a Client and also manage for a separate Client Olives Yard which lies behind the block. Chris Lawson was called out at 1.30am on Monday morning and took the following photo at that time showing the Nail Bar end of the building well alight with the arm the Fire Brigade were using to pour a mixture of water and foam onto the fire in the roof. The offices above were occupied by Marketing Eye. 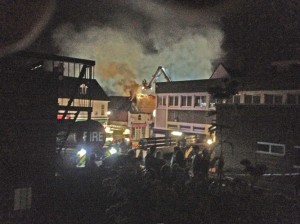 This is a significant disaster for this part of the High Street which caused traffic chaos on Monday morning as the High Street remained closed from Civic Approach to the Bell Lane traffic lights. The extensive damage can be seen in this view of the rear of the block the following morning. 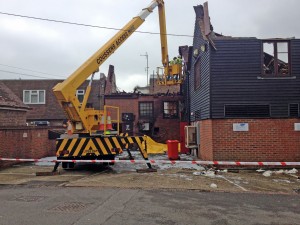 Since that time we have been liaising with Wealden District Council Building Control, the Fire Brigade, the Police,  structural engineers, loss adjusters and insurance assessors. It is important to make the structure safe as soon as possible, to re-open the high street fully and to give access to Olives Yard for both customers and retailers. It is an ongoing process but hopefully some degree of normality will resume by Thursday.

It is actually astonishing to consider how much damage has been done by what apparently was originally a minor act of vandalism. The Police and Fire Brigade believe that the fire was started in a bin pushed up against the rear of the Sense charity shop and it spread up into the roof very quickly completely destroying the 1st floor and roof above the Sense shop which was occupied by Swindells Accountants. They have lost computers and servers as well as a significant quantity of paper files. Fortunately their electronic records were backed up off site, as were Marketing Eye’s, enabling them both to be up and operational again in a few days. A lesson for all businesses!

Uckfield News website has more photos and an interesting description of how events unfolded along with comments from various people in the Town – http://uckfieldnews.com/.

Early indications are that the ground floor shops have not suffered significant fire damage, mainly water damage from above. Subject to checks by engineers it seems likely that the 1st floor and roof can be rebuilt on the existing structure. Interestingly it appears the old timbers in the roof withstood the fire much better than newer timbers, the initial charring providing a protective layer.

Shortly the whole site will be covered in scaffolding with protective sheeting to stop any debris falling down on the pavement whilst insurance claims are sorted out and a planning application is submitted for building repairs. It is likely that the rebuild will take the best part of 12 months so it will be something of a scar in the High Street for quite some time. The Landlords of the block will be working as fast as they can to ensure that the tenants can reoccupy their premises as soon as possible.

We understand both British Heart Foundation and Sense are keen to find temporary accommodation if possible but that is proving difficult as there are no suitable vacant shops in the High Street available currently.

We will post regular blogs about the fire and the rebuild progress – so watch this space.