A smart modern farm building at Easons Green has just become available which would be ideal for a carpenter or craft workshop. 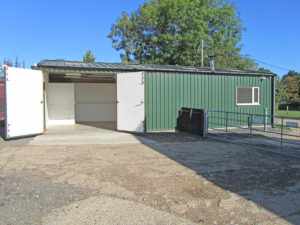 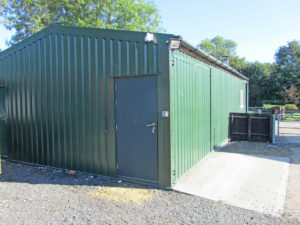 There is some 700 sq ft of workshop together with a useful lean-to store of 158 sq ft giving some 865 sq ft in total. 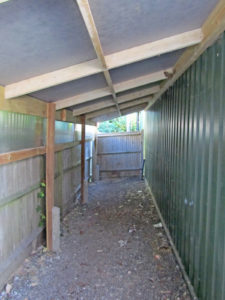 Located in a secure working farm environment with a night time canine security patrol, Easons Green is close to the Halland A22 junction so easily accessible. 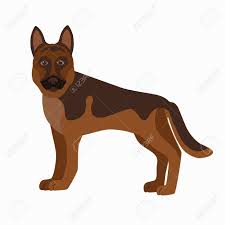 The unit is available on a 1 year licence on an all inclusive basis at £545 per calendar month including a contribution to building insurance, maintenance of common areas and good cctv coverage. Currently there are no business rates to pay. Viewing is recommended.

Lawson Commercial have sold the former engineering works in the heart of Herstmonceux known as The Old Bakery. 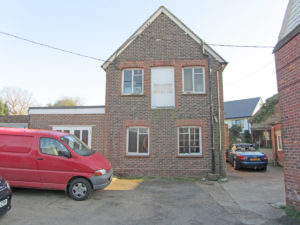 This 2-storey brick building with 2 car parking spaces offering just under 2,000 sq ft of accommodation had been an engineering workshop for some 50 years. 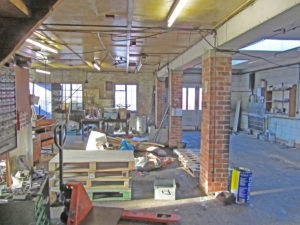 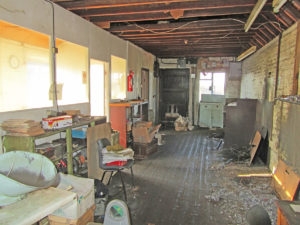 Competition for this freehold was very strong.  There was considerable interest not only from owner occupiers but also from residential developers and a number of offers were received. With so much interest it went to a best bid situation and the successful purchaser is going to occupy it themselves for storage and office purposes. A price in excess of the original asking price of £180,000 was achieved.

This just highlights the strong demand in East Sussex for freehold premises. There simply are not enough in the market to satisfy current demand. Thus we would welcome hearing from anyone considering selling a commercial property.

Lawson Commercial have let the former Cadari gift shop at 21a High Street, Uckfield to a new business who is going to open as a nail bar. 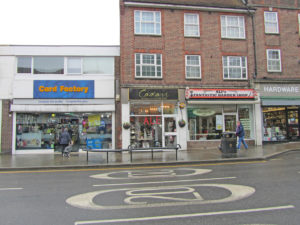 Sadly this bijou gift shop next to The Card Factory, although in a very prominent position in the Town, was not able to prosper in the face of the continuing growth of online retailing. It is possible at just under 400 sq ft the shop was too small for this type of business. However we are pleased to welcome a new business into the High Street offering services which are proving popular currently and are not available online. They thus lend themselves very well to this particular shop.

Ideal for a sports professional who is looking for somewhere to set up a personal training studio Lawson Commercial have just been instructed to market Unit 3 Riverside in Uckfield which already has planning consent for this use. 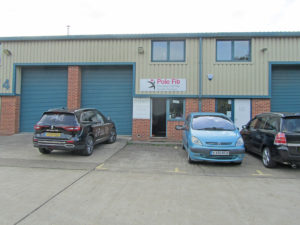 The unit comprises just over 1,000 sq ft of good ground floor area with a cloakroom and is available on a new 5 year lease at a rent of 9,500 pa. The Riverside units are good smart modern units built in the mid 1990s to an excellent specification. Unusually for many of the small units in Uckfield they each have 5 car parking spaces. They are thus ideal for this type of business.

Lawson Commercial have just been instructed to let a spacious industrial/warehouse unit on the Ghyll Road Industrial Park in Heathfield. 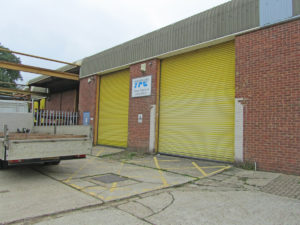 It benefits from 2 loading doors and a full height area of just under 2,000 sq ft with an eaves height which is better than average at some 19 ft. 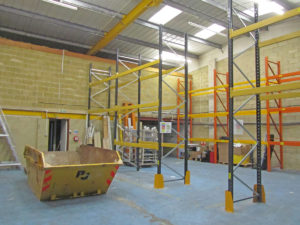 There are 2 useful 1st floor offices totalling 441 sq ft which are to be newly redecorated. Being some 2,837 sq ft overall, the unit is available on a new 10 year lease at a rent of £20,000 pa. It is not often we get such a good, smart modern unit in Heathfield and it should appeal to a wide variety of potential occupiers.

Chris Lawson reports: What a night Saturday night with another very successful Uckfield Carnival.  Well done to the Uckfield Bonfire & Carnival Society for organising such an amazing event. 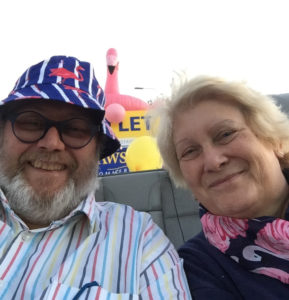 Julia and I have been attending the Carnival celebrations for many years and have been involved in floats on several occasions initially as part of a Chamber float and more recently as Lawson Commercial.  Following the success of our inflatable swan last year this year the star was a giant pink flamingo. Getting her ready for her appearance on the High Street took most of Saturday so that she was ready for the off by 6.30pm as the float procession assembled in Bell Lane – together with a more scary participant. 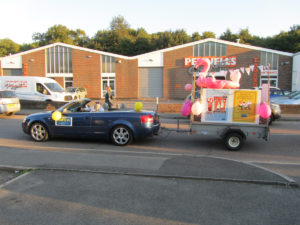 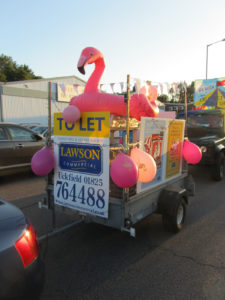 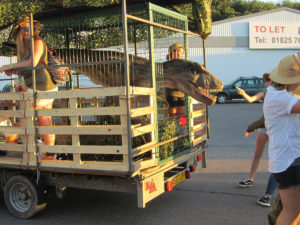 There was an amazing turnout lining the High Street, Newtown and all round Framfield Road. Sorry if we didn’t wave at you but the crowd was so large it was difficult to spot everyone. It was great to see so many families and small children as well as quite a few dogs enjoying the procession.  It was particularly good to see the delight on children’s faces when they spotted our pink flamingo. Unfortunately Toffee and Cleo had to stay at home as there was no room in the car. 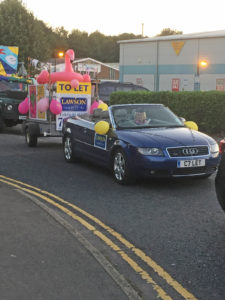 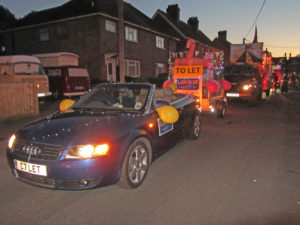 Although starting initially in daylight by the time we had joined the foot procession coming down the High Street, wound our way up Newtown, round the Framfield Road area and back up the High Street it was fully dark making the lights more effective. After a turnaround via Downsview Crescent and Browns Lane we were ready for a return down the High Street to finish in Bell Lane. 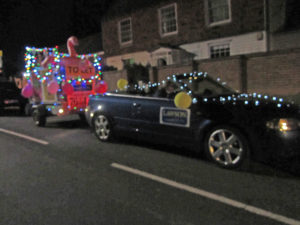 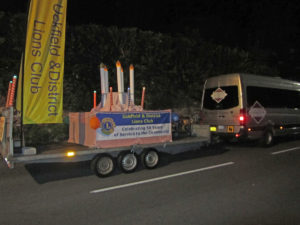 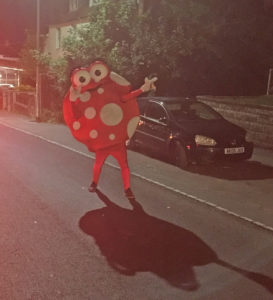 There was brief pause out the Cinque Port Club  for the remembrance of those Uckfield people who died in the First World War including the extinguishing of torches and prayers led by Father John which was particularly moving and a fitting tribute. It was nice for us further back in the floats to be able to follow this via a live feed from Uckfield FM Facebook.

Well done also to Uckfield FM for their broadcast throughout the evening. It is amazing what modern technology can do. We were pleased to have played our part in a really excellent evening and I understand a significant sum was raised via the street collection.